Continued from Flanagan Family: 1882-1902. During this period, seven of the nine Flanagans die and one is institutionalized. Our grandmother Catherine (later known to all as “Kitty Mom”) is the only one to thrive. It seems like a divine challenge to her resiliency, that shortly after the last of her family disappears, her 44 y.o. husband succumbs to a botched surgery. (Summaries by family member and links to more detailed stories can be found on Mad in Pursuit.)

Construction of the vast Louisiana Purchase Exposition is under way in Forest Park. According to family lore, MOSES M FLANAGAN, who is a foreman at a planing mill, contributes his talents. The Flanagans prosper.

MOSES and MAGGIE rent a home at 4221a Farlin Avenue, in north St. Louis. It has five rooms and a bath for their family of nine.

Jun 23. MAGGIE KEVILE FLANAGAN dies during surgery for uterine cancer, leaving behind seven children, aged 2 to 13. She was 33 years old.

According to a later newspaper report (below), MOSES is able to redecorate the house with new furniture and carpets.

Jan 24. At 6 a.m. at fire begins in the Flanagan home. 18 y.o. NELLIE gets her photo in the paper for rescuing her sister and her piano. Although the house doesn’t burn down (the family continues to live there), the newpaper reports that their new furniture and carpets are ruined, along with many of their belongings. (More at Mad in Pursuit)

Apr 5. With her future step-mother on the scene, 17 y.o. Catherine writes the following poem in Maggie’s book:

“To my mother:
Forgotten you, well if forgetting
Be thinking all the day.
How the long hours drag since you left me.
Days seem years with you away,
And a hearing through all this strange babble
With voices now grave now gay; Only your voice; Can this be forgetting?…”
[Pages and full text here]

Apr 18. MOSES gets married to his widowed sister-in-law BRIDGET MEEHAN FLANAGAN, who moves down from Chicago, presumably with her two sons Timothy (16) and James (14). (Marriage license)

Someone without their facts straight decides MOSES’ marriage to BRIDGET is romantic–old sweethearts reuniting–and gave a story to the St. Louis Globe Democrat:

At some point shortly thereafter, in this crowded household, Bridget whacked 9 y.o. ETHEL in the head with a frying pan, which resulted in ETHEL’s brain-injury induced epilepsy. (Oral history)

Oct 6. MOSES is robbed downtown in the wee hours. Wondering what he was doing so far from home at this hour. According to the Globe-Democrat account, it is one of a rash of assaults by “highwaymen” that result in the police being put on special alert.

Nov 25. MOSES R turns 12. In his later obituary, the family observes that at age 12 he becomes a “tough youngster.” He is the fifth child of seven, being raised by a single father–a father distracted by restoring the family home after a fire in January, followed by the start of a tumultuous second marriage in April.

MOSES begins the year at 6227 Newstead, working as a draftsman (City Directory).

Jan 7. BRIDGET FLANAGAN is back in Chicago with her two sons, in a rented house, taking in boarders, listing herself as “widowed.” (US Census).

Feb 6. Then in the census, he is living with sons MOSES and JOSEPH in a rental at 4245 Lexington Ave (US Census).

Apr 3. From his house on Lexington, MOSES makes the heart-rending decision to place his two youngest children ETHEL and JULIA into care at the Guardian Angel Industrial School (1029 Marion St, in south St. Louis). He pays $10 a month toward their upkeep.

Apr 21 (U.S. Census date). 19 y.o. CATHERINE has moved in as a boarder with the Flynn family at 3861 Kennerly. She works at a telephone operator, which (by oral history) is a job she is very proud of.

NELLIE and THOMAS are not found in the census data.

Nov 10. MOSES files for divorce from Bridget, according to the notice in the St. Louis German-language newspaper Amerika. Translated: “Because of malicious leaving [desertion?], Moses M. Flanagan filed a divorce suit against Bridget Flanagan, in the local district Gericki [?]. The couple married on April 19, 1908 and separated on September 14, 1908.” 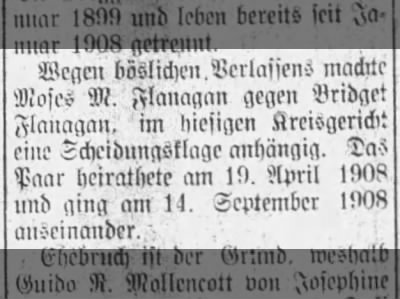 As the year begins, NELLIE is back home with her father and brothers, working as a clerk (City Directory)

Feb 14. MOSES marries 42 y.o. MAY GAINES. Nothing further is known about their relationship. (Missouri marriage license)

CATHERINE moves to 1957 Semple, the home of her aunt and uncle Delia and Patrick Keville. (City Directory)

Mar 31, Palm Sunday. THOMAS BARRETT decides to court CATHERINE, who has been dating his brother FRANCIS. He has ambitious plans for the grocery business and thinks she is the best partner to help him. (Oral history)

MOSES has moved to 4241 Evans Ave and is working as a salesman. (City Directory)

Feb 5. NELLIE marries railroad clerk HARRY KRALEMANN. They reside at 4149 Belle Place. She works as a telephone operator at the Hotel Jefferson (see news article below).

May 24. MOSES R’s police record begins when he is arrested as a burglary suspect. He was known to hang out with guys who associated with (if not members of) the notorious St. Louis gang Egan’s Rats.

Mar 14. 20 y.o. MOSES R sentenced to 6 months in City Workhouse for forgery. His life as a member of a crime gang is in full swing.

Apr 8. MOSES R. gets in trouble. He hits the papers with a failed Sunday morning robbery at a Pine Street saloon.

May 26. MOSES R was sentenced to one year in the City Workhouse.

Oct 21. 17 y.o. LORETTA JULIA FLANAGAN enters City Hospital with complications of diabetes. We presume she had been living all along at Guardian Angel Industrial School.

Dec 21. MOSES R (using the alias Thomas Maroney [aka John Flanigan]) is picked up by the Chicago police for the murder of mobster Charles “Chancellor” Stillwell during a dance at Barney Grogan’s 18th Ward Democratic Club. But the police couldn’t make the charges stick.

Apr 16. MOSES sends a letter to CATHERINE congratulating her on the birth of her sons. The full text is here. It show he is now in business for himself and having trouble with a poor-quality worker. A note on the back says he has given up his residence on St. Ferdinand and she should send mail to his shop.

May 14. MOSES “MARONEY” FLANAGAN is shot nine times on West Monroe, in Chicago, and dies — a casualty of gang warfare at the dawn of Prohibition.

Sept 10. After being under the care of City Hospital for nearly a year, LORETTA JULIA FLANAGAN dies of bronchial pneumonia.

THOMAS FLANAGAN (26) is nowhere to be found in the 1920 census. Brother JOSEPH (24) was boarding with a family on Pine St, working as a machinist for a planing mill.

Jan 18. 22 y.o. ETHEL, with her ongoing epilepsy, is residing at the St. Louis City Sanitarium, where it is presumed she went after aging out from the orphanage. She becomes the family secret and resides at the Sanitarium (later the Missouri State Hospital) on Arsenal till her death from pneumonia in 1956.

Feb 6. MOSES is residing at St. Vincent’s Institution for the mentally ill in St. Louis County. (US Census)

May 6. MOSES dies of “general paralysis of the insane,” an infectious central nervous system syndrome caused by tertiary syphillis.

Dec 3. JOSEPH FLANAGAN dies in the City Hospital of lobar pneumonia. He was 28 years old.

Jul 24. After two weeks in the City Hospital, THOMAS FLANAGAN dies. He is 31 years old. The cause of death is listed as delirium tremens, a toxic state occurring when a chronic alcoholic suddenly stops drinking.

Mar 23. CATHERINE gives birth to her fourth child KATHLEEN ELLEN in the family’s apartment over their second store at 1401 Rowan Ave.

Oct 1. CATHERINE’s husband dies from sepsis after gall bladder surgery, leaving her with four young children and two grocery stores to run. She has no family left…