22 Nov. Marriage between CATHERINE “KITTY” FLANAGAN (age 22) and THOMAS BARRETT (age 29). Tom owns a store at 4841 Easton Ave (at Bayard). He has recently bought a home at 4152 Lexington and moved his mother and three siblings from above the store to the new address. Date of property purchase? 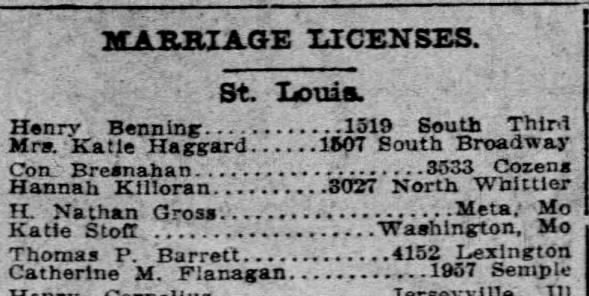 City Directory: Living at 4152 Lexington Av (which would continue to be his mother’s home), St. Louis MO, still operating a grocery store at 4841 Easton Av.

Date?? Tom’s brother FRANCIS PETER marries MARY ABIGAIL CURRAN (Ewald Curran’s sister). May be how Ewald makes his first connection with the Barretts. He would have been 12 years old! [First child born in 1917]

16 Mar: Globe-Democrat: 3 stores? Ad for where to buy the Quaker [Oat] Cooker lists:

14 May. Death of Kitty’s brother Moses Rafael Flanagan from gunshot, in Chicago

6 Nov. Tom Barrett files for a patent on SKIRMISH, a game he invented. 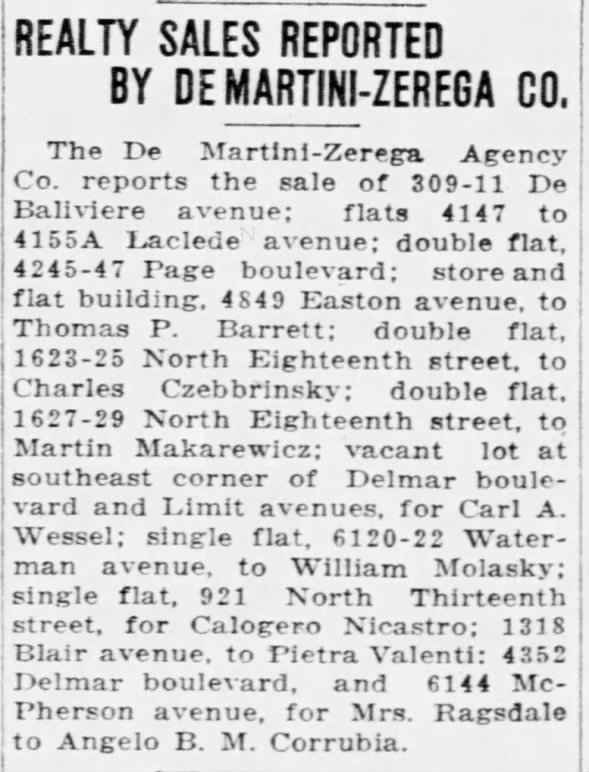 Date? Bill Barrett sick with pneumonia for many months. Lung drained, collapsed. Wound kept draining, did not get better till they discovered doctor had left a sponge in incision. (Scar on his back noted on WWII Registration card.)

Date? Closed stores at 4841 Easton and on Cote Brilliante

2 Oct. Death THOMAS PATRICK BARRETT of peritonitis in St. John’s Hospital. To Kitty’s horror, he had chosen the same surgeon for gall bladder removal as had botched Bill’s lung surgery. 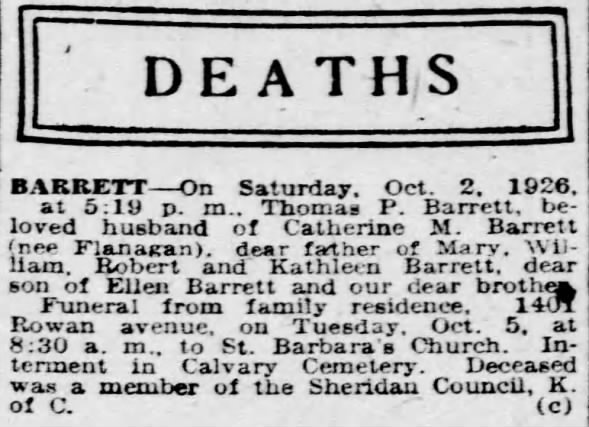 Date? Ewald Curran (abt 23) is a clerk at Barrett’s Market. Arranges child care for Kathleen with his mother on Romaine Place.

Date? Kathleen (abt 4) is a flower girl for who? (beautiful photos)

Date? Kitty raised canaries. Made mom hold each canary while she clean cage (or did something to canary?). The soft squishiness terrified Kathleen and she never stopped being afraid of birds out of their cages.

Census. EWALD CURRAN, living with parents on Romaine, working as a “press feeder”

Actual date needed. Kitty converts back of store to commercial space (5875 Ridge) and rents it to Maizey Braun, who sells notions (1930) and operates a confectionery (1931, 1932)

3 May. (Sunday). KATHLEEN is severely burned (date from photo). Theory: she was in second grade. Had skipped kindergarten and was put right into first grade; started 2nd grade over in Sept 1931.

Actual date/year needed. MARY pictured with LESTER (and KATHLEEN) at Castlewood. When/where were they married?

Catherine leases store to Chas. I. Winthur, whose name appears in City Directory through 1939.

Confectionery still in operation, but name change to “Marie Brown.” (Mom said it was always the same woman. No record in 1933-34, but reappears as Marie Brown 1935-1938. Maybe she just anglicized her name.) 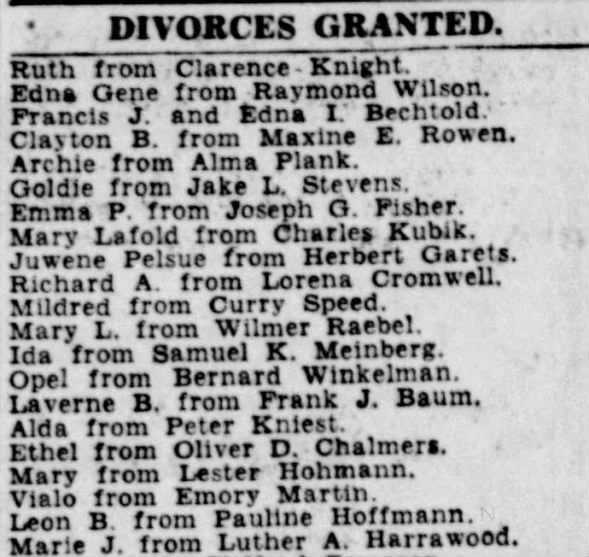 Actual date/year needed. Cath and Ewald buy club house in Castlewood (assumed to be after marriage; Kathleen’s photos on horseback there look like she’s about 11). Mary was spending a lot of time out there at the Bobolinks club on East Hill Dr, so KM & Ewald thought the girls needed more supervision and they wanted to join the fun.)

2 Jul. Marriage MARY and C. Arthur Backlund at (I believe) St. Barbara’s. His address 5873 Wabada. Per License notice in Post-Dispatch and STL Star & Times). Ewald is in the wedding.

Sept. KATHLEEN starts high school at Blewett, but quickly transfers to Alphonsus Rock. She is elected class president, but finds out it’s because she has cute older brothers.

Catherine and Ewald open the All Inn Tavern & Restaurant at 5875 Ridge (where the confectionery was). Catherine listed as the proprietor in City Directory. Mary works as a waitress there. Referred to as “the tavern.”

Sept. Marriage. Mary and Lester Hohmann (for the second time). They reunite after meeting at Franklin Hohmann’s wake in April. Record needed

Birth. GEORGE HOHMANN to Mary and Lester, 4251 Penrose (4-family flat owned by Catherine Curran. Kitty later negotiated a trade with the Corcoran family [siblings Irene, RoseB. (d. 1952, age 44), and Mike], who sold their house on 5835 Ridge at Laurel for an apartment here.).

Well, I got out the old 1940 City Directory.  He evidently moved from the 4841 Easton & Bayard address and bought the stores at 4865 and 4867 Easton. I recognized the name of the liquor store at 4865 Easton: LePage Edw. Liquor and Tohtz Butcher Supply at 4867 Easton.  These stores were across the street from the home of Gene and Ann McKenna where we visited often.  Ann’s mother lived with them and her name was Fahey who was some relative of my father.  Too bad we didn’t ask more questions then… While looking up the Barretts, I found that Uncle Francis had a confectionery at 5310 St. Louis Ave and lived at 2519 Semple Avenue.

Draft Card. Bob is working at Carter Carburetor defense plant, after deciding he could not run the store with Bill.

1 May. Death BOB BARRETT, in airplane crash over Utah

Jul. Birth of BARBARA ANN HOHMANN to Mary and Lester

Summer. KATHLEEN meets Walter Price for the first time at a bar in Castlewood.

Date, year? Catherine rents out basement for parties. (Long bar, nickel and penny slot machines, player piano [defunct when the War made parts impossible to get]).