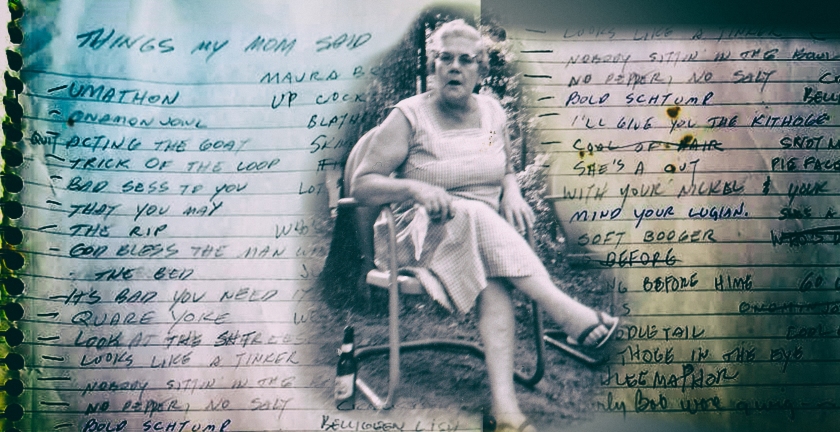 BRIDGET DUNNE PRICE (1894-1978) was an Irish immigrant who had many wry expressions that she passed on to her children. At some point, her son Pat (1931-2013) started a list of them in his notebook. After his death, granddaughter Katie took a picture of the page, loving the sight of his handwriting and his gentle sense of humor.

I posted the list in our family group on Facebook and asked for help interpreting and gathering definitions for the generations to come. With many thanks to Dunne family cousins on both sides of the Atlantic, I’m posting our work so far. Interpretations still welcome! You can comment below.

“TRICK OF THE LOOP” = Mischievous person. A trickster con man, like a traveling magician.

“GOD BLESS THE MAN WHO MADE THE BED” = God bless the work, the man who does more than expected (We also thought it might refer to the man who invented–or built–the bed we can fall asleep on.)

“LOOK AT THE SHTREESE ON HIM” = STREESE. Look at that face, that smirk. (I also heard STREESAHON via my dad. Sometimes he’d say “pussahon” if we had a puss [a pout] on our faces.)

“LOOKS LIKE A TINKER” = Tinker is the old Irish name for a Traveller, so refers to being very poorly dressed or dressed like one of the traveling folk.

“NOBODY SITTIN’ ON THE BALL” [transcribed correctly?]

“I’ll give you the KITHOGUE” = CITEOG. Smack with my left hand.

“With your NICKEL AND YOUR DIME” = Someone proudly making the most of their poverty.

“Mind your LUGIAN” = LUGEEN. Mind your language! Watch what you’re doing there.

“SHLEEMAPHOR” [SHLEEMAPHON?] = this is probably “string of piss”! Long and lanky, someone with no fat on them, “look at that long string of piss.”

“WHO’S DEAD? JOHN HEAD” = Said when you’re caught doing something you shouldn’t have.

“WELLSTON’S GONE TO THE DOGS SINCE KATZ LEFT.” Wellston was a town with a once-lively shopping district adjacent to the old neighborhood in north St. Louis. Katz was a small chain of drug stores. (Thanks, Dan P.!) I guess it’s one of those things people say repeatedly to indicate why people don’t go somewhere anymore.

“CRACKPOT” and “SHE’S A CRACKPOT” = Eccentric or foolish person.

“SNOT-NOSED MONKEY” = A kid with a messy runny nose.

“GO ON WITH YOU!” = Get outta here! (laughing with you) Or, stop talking in jest. Stop kidding around.

“Going to the FAIR OF ATHLONE” = Your answer when it’s none of the asker’s business.