1901. We first see the 11-year old Ellen with her kid sister Bridget, staying at their grandparents’ house over in Rushestown at the time of the 1901 Census.

Did she attend school? Her name doesn’t appear in the registry of the Curraghmore school, where her younger siblings went [3]. On the 1930 U.S. Census, she answers “no” to the Attended School question.

1907. In April, at the age of 17, she leaves her home and family for America. Was she the independent first-born child eager to see the world? Or was she urged out of the nest by parents who saw an opportunity for her as the family home grew crowded with children?

With $25 in her pocket, Ellen sails for a week on the RMS Carmania to the Port of New York. She is accompanied by her Uncle Mike Martin and nine other residents of Kilkerrin [2]. From NY, she and Martin take the train west to St. Louis, where they are welcomed by her mother’s sister Delia (Martin) and Delia’s husband Thomas Dunne. Both are natives of Rushestown.

1908. Soon after settling in St. Louis, she begins anglicizing her name as Helen. [4]

She probably gets work as a domestic. That is the standard path for Irish girls, most of whom arrive as singles in this era. I can’t locate her in the 1910 U.S. Census.

1909. In February, according to a postcard sent by her and kept in her uncle Mike’s collection, she is living at 322 N. Newstead [4]. From browsing newspaper ads of the day, I can see it was an 11-room rental, so my best guess is that she is working as a domestic with the family renting the property. But by 1910, she is not there.

1911. She marries Ernest Price (1889-1944) about 1911. Ern was the third son of English immigrants and Episcopalians WJ and Sarah Price and a member of the Price family carpentry business. As part of her assimilation, she calls herself Helen. You have to wonder what was going through “Helen’s” mind as she marries into an English family while her people back home are struggling so vigorously against England, the colonial power responsible for so much of their poverty and powerlessness. And what did her Irish family have to say about it? From all accounts, it was not a Romeo and Juliet scenario. Everyone seemed to get along just fine or at least kept their mouths shut.

Funny–I found an instance of her signing Ellen, then overwriting Helen, even after she is married.

1914. She sponsors her sister Bridget’s immigration. Auntie and Ern were living then at 1431 North Kingshighway (now torn down).

1917. On June 5, like all men of his generation, Ern registers for the draft in the run-up to America’s involvement in the Great War in Europe. While three of his brothers are called to service in World War I, Ern is exempt because he is married, with a child.

1920. Census data shows the family still on Kingshighway in their rental. Ern earns his wages as a carpenter.

1930. The family continues on Cote Brilliante, in their home valued at $5000. They own a radio. Ern supports the family as a carpenter, “working on his own account.” The Great Depression has begun.

Helen’s brother Patrick Dunne lives with them. He is a laborer with Laclede Gas. During 1939, he was able to contribute over $1200 to the family income.

1941. Her son Bill enters the military at age 28. Up to this point, he’s been working for Kroger, a grocery store chain.

1942. The Great Depression destroyed the family carpentry business, but as the War is beginning to get people back into the workforce, Auntie’s husband still isn’t working. On his updated Selective Service card (April 26), Ern reports that he is “extremely nervous”–his explanation for not working. We have to wonder if his health is beginning to fail and if Auntie is now responsible for their income.

After the War, Auntie’s son Bill marries Florence Mogen, a girl from the neighborhood, and he joins the St. Louis police force. Auntie goes to work for Wagner Electric Company and makes a career for herself there.

1959. Auntie returns to Ireland with her younger brother Pat Dunne and his wife Mary. 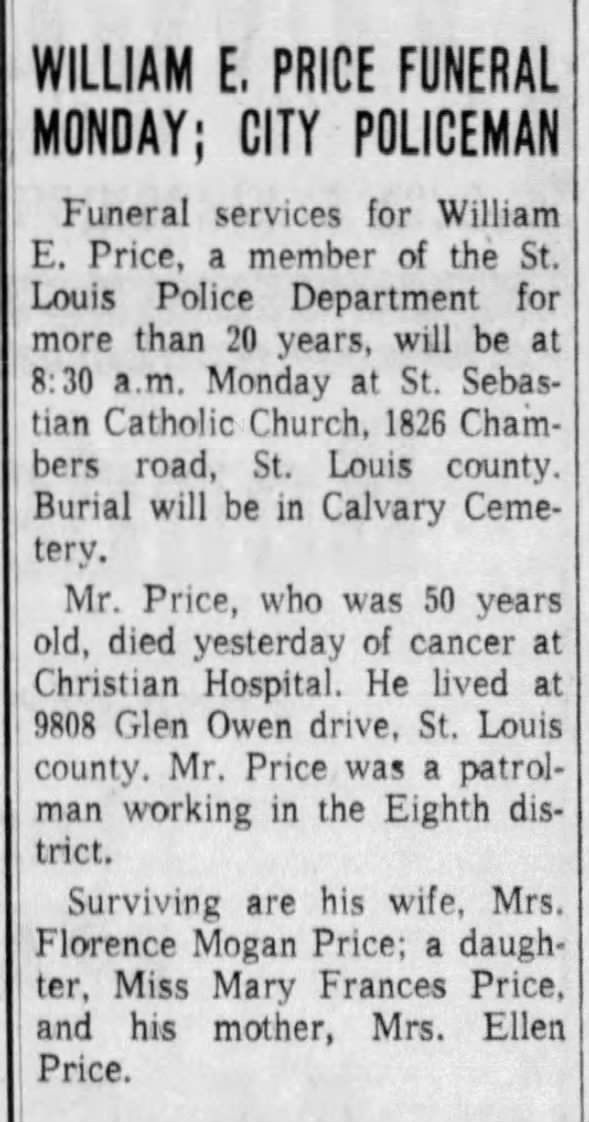 [1] To spare confusion, it’s helpful to know that Ballaghduff townland residents also belonged to these communities:

[3] As published in the comprehensive 2010 reunion book.

[4] Before phones were common in homes, Ellen regularly sent notes by postcard to her Uncle Mike Martin and his wife. Many of these were kept by the Martin family