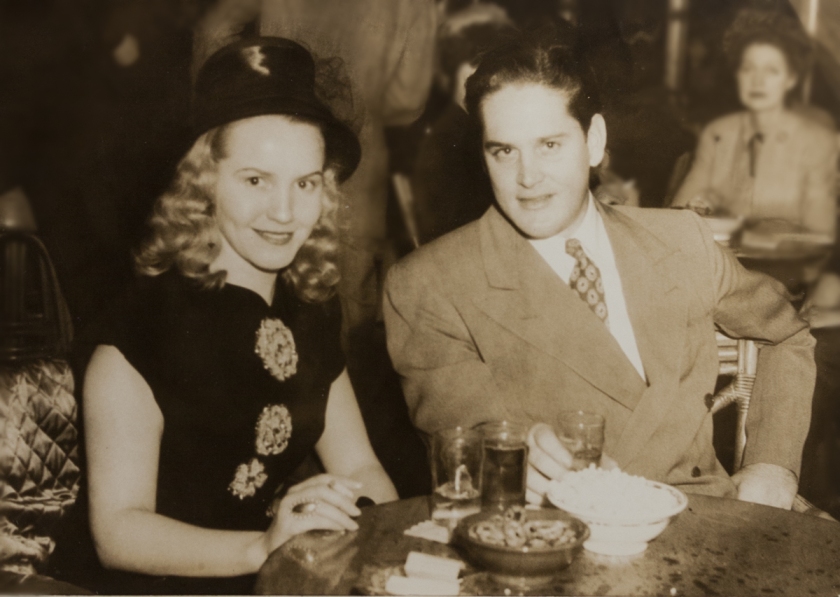 My dad Walter Price (known as Curly) told me that he first met Kathleen Barrett at a bar in Castlewood during Labor Day weekend, 1942. It was wartime. Her brother Bob had been killed four months earlier. Curly was about to report for duty. Curly was impressed with the blond beauty but he couldn’t stick around.

Seventeen months later he was a radio sergeant in the Air Force, stationed in Dyersburg, Tennessee. He unexpectedly got a weekend pass and hitched up to St. Louis with 35 cents in in pocket.

When he got home, the house was empty. No one could lend him a dime. He walked down to the corner store. No one he knew there either. He decided to hitch over to the Corkscrew on Kingshighway. Someone would have pity on a poor GI and buy him a drink. And they did. He claimed later that he asked around about Kathleen Barrett, but heard she was engaged. More drinks.

Meanwhile, Kathleen Barrett was far from engaged. While Curly was at the Corkscrew, she was at a party in her mother’s basement. Kathleen’s mother, who operated Barrett’s Market, had turned the big basement of the store into a party venue. That night it had been rented out by the Cronin family to celebrate a returning serviceman. Kathleen knew the Cronins because she went to grade school with Lorraine Cronin. Lorraine was at the party and she brought her boyfriend Jack Price. Jack was Curly’s brother.

Being wartime, of course, there were few men at the party. So Kathleen goaded Jack and Lorraine into taking her to the Corkscrew to bring back some guys. Off they drove.

And, to everyone’s surprise, there was Jack’s brother, Curly.

You’d think there would be violins playing when Curly saw Kathleen again. But by that time, all the single girls at the Corkscrew had been buying Curly drinks. Jack dragged him into the car. Curly turned to Kathleen. “Are you Betty Letty?” he slurred.

“No,” she replied. Her retelling of the tale includes an eyeroll.

But a guy was a guy, so they brought him back to the party. Quickly, another girl cornered Curly for a dance.

Hold on a minute, Kathleen thought. I was the one who went to the trouble of going out and getting him! She took the bold move of cutting in.

Whoever Betty Letty was, my future father forgot all about her. He had found his Kathleen Barrett! When the evening ended, he walked her up the back stairs and gave her a little kiss. He wanted to linger but the family chow dog Ming growled at him. So off he went with Jack and Lorraine.

That was the beginning.

But the courtship still had a rocky start. Mr. Sociable was completely intimidated by the fair Kathleen. He confessed later that for the first two or three dates, he had to get his courage from a bottle before picking her up. Kathleen was beginning to think he was an ass.