When it comes to family history, I want the story. Filling in the blanks on a family tree has its charms, but then what? Who were these people? I’d like to be able to talk with them, to ask a few questions. What was going on?? What were you thinking? What were you feeling? Why that choice?

This train of thought reminds me I live in the region that spawned the American Spiritualist movement, which holds that the spirits of the dead exist and have both the ability and the inclination to communicate with the living. I’m annoyed that they haven’t advanced their science to the point of offering something to family historians.

On the other hand, maybe family historians do talk with the dead. We may not drum ourselves into a trance, to hear voices and have visions. We are more intellectual, consulting databases instead of crystal balls. Our ritual is a methodical recording of facts on a timeline as we work ourselves into a flow state, which is akin to trance. The mind quiets. Opens. Add in some small intuitive leaps, and suddenly you have gold.

My metaphor has always been the data dragon parting with a nugget of gold. But maybe it is my ancestor whispering a search term or shining a light on a new data set or new option.

Stories slowly take shape. I always fall in love with those who care to reveal themselves. They teach me about their lives. I’m switching my metaphor from the dragon’s data cave to visitations.

This week I visited with my great-grandfather MOSES McCARTY FLANAGAN, my mom’s maternal grandfather. Found a notice in a German-language newspaper published in St. Louis. I could tell it was about his second marriage, but it was not only in German, but also in the eye-boggling Fraktur script. 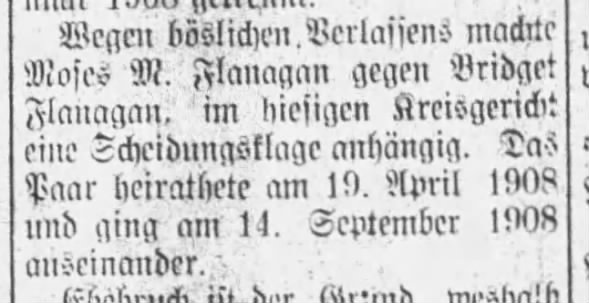 I couldn’t let it pass. Working back and forth from the image above, to the OCR version in Roman letters (full of transcription errors), to Google Translate, I finally got it:

Moses M. Flanagan filed a divorce suit against Bridget Flanagan in the local district court for malicious leave. The couple married on April 19, 1908 and separated on September 14, 1908.

Moses and I were talking again. Two new revelations: Moses was the aggrieved party in the procedure; and their marriage had only lasted five months.

Dear Moses, what the hell happened?

In 1908, Moses had been a widower for five years. He had seven children, ages 7 to 19 — two responsible young women, three rowdy teenage boys, and two little girls. His Chicago-based brother Jeremiah had died shortly before Maggie, leaving a widow with two boys, now ages 14 and 16.

Moses was prospering as an estimator for St. Louis Mill Work and Supply, but already that year, in January, the family had suffered a devastating house fire, which destroyed many of their personal possessions.

Did Moses at last feel out of control? Too dependent on his older daughters to run a household, much less to rebuild one? Helpless to discipline teenage boys? Falling short in parenting his baby girls?

So he connects with his sister-in-law Bridget Meehan Flanagan. Or does she reach out to him?

A newspaper article (riddled with errors) suggested they were childhood sweethearts in Ireland. Maybe, but Moses and Jeremiah both married and started their families in Chicago, so Moses surely knew Bridget there as well. 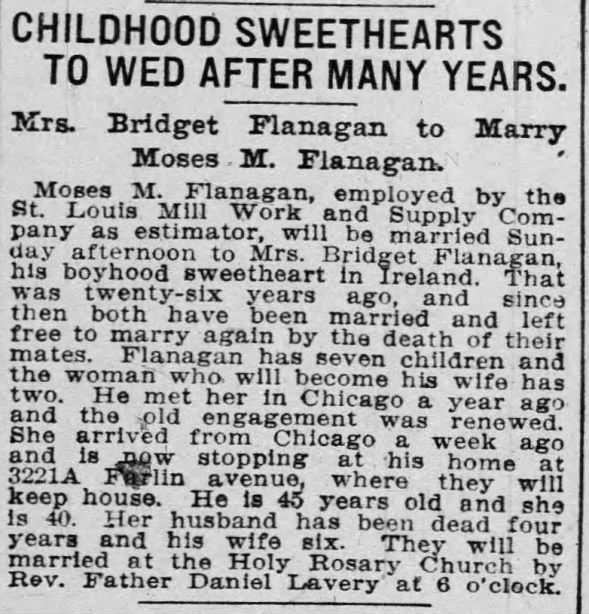 The article states that she arrived in St. Louis a week before the wedding. Talk about faith and fantasy!

So what really happened when the two families combined? My grandmother Kitty (second daughter, age 18) remembered Bridget as the wicked stepmother. She witnessed Bridget take a frying pan and smash it into her sister’s head. Ethel was nine and the blow caused epilepsy, which ultimately resulted in her being institutionalized. Or so the story goes.

What we now know is that by September, Bridget had enough. She hightailed it back to Chicago with her two boys. Had Moses been a lout or had she simply gotten in way over her head? Did her boys get along with their cousins? Were the older girls welcoming and helpful or cold and resentful? The more information is revealed, the more questions I have.

Stick around, dear Moses. I want to learn more.