My grandmother Kitty Flanagan suffered many disruptions in her youth, but she remembered the time in Leclaire, Illinois, as the golden years, full of music, learning, and family prosperity. The Flanagans lived in Leclaire roughly between 1893 and 1898, when Kitty was 3 to 8 years old, a magic time for any well-loved child, right?

Kitty spent a lifetime trying to recapture those years, full of beauty and laughter.

Was there something special about that interlude between Chicago and St. Louis? What attracted her parents to the Edwardsville area in the first place?

Turns out that Leclaire was in fact a little Utopia, an intentional community founded on the vision of an enlightened relationship between employer and workers.

Leclaire was built around the N.O. Nelson Manufacturing Company, built as a model workplace. The goal was to combine the best of capitalism and socialism by means of a profit-sharing system.

A. E. Cameron, a prominent St. Louis architect, was hired by Nelson to design a remarkable manufacturing facility which stood in marked contrast to other factories of the time. The single story brick buildings were spacious and each housed a separate manufacturing function- machine shop, marble shop, cabinet shop, brass shop, and varnish shop.

Skylights topped the buildings, and the walls were lined with large, arched windows, which flooded the work space with natural light and opened to admit fresh air. All buildings were equipped with electrical wiring, a sprinkler system for fire protection, and ice water for the men. The grounds were landscaped with grass and flower beds, and screened from the rest of the village by a hedge of Osage Orange Trees.

His unionized workers didn’t have to live in the community, but he encouraged it by building pretty little houses in a variety of styles, by giving away plants and flowers from his greenhouse, and by adding athletic amenities, a library, and a theater. The educational system included both academic and manual training, for children and for adults.

An evening lecture series was presented at the school house during the winter. Notable personalities such as Jane Addams of Hull House, Edward Everett Hale, and Sam Jones, were brought to Leclaire. There were regular concerts, debates, dramatizations, and lantern slide shows. Young people held dances on weekends. Men from the company organized a brass band which performed throughout the country.

The Friends of Leclaire have an archive of news articles about the company. I was thrilled to find my great-grandfather there in an 1895 article published by The Edwardsville Intelligencier. He was the Superindendent of the Cabinetry Shop.

The planning and cabinet mill turns out finished wood work for houses, mantels, bathroom appliances, special doors, sash and frames, and fine cabinet pieces. In this line the company employs not only mechanics, but artisans.

In 1895, Kitty (age 5) and Nellie (age 7) would have begun school here, in a spacious four-room schoolhouse that included a library.

Kindergarten children were taught, among other things, the cultivation of flowers and vegetables. Between this age and twelve a regular school course was followed, supplemented by manual training.

So Kitty had moved from the life in an apartment on the congested Cottage Grove Avenue in Chicago to a rural Eden, where her first lessons in school were about gardening. It was a community consciously built for beauty, contentment, and learning, as well as for productivity and profit. No wonder those were her golden childhood years.

It also positions her father Moses as an idealist, willing to uproot his family for a vision of the good life — the promised land he left Ireland to find. 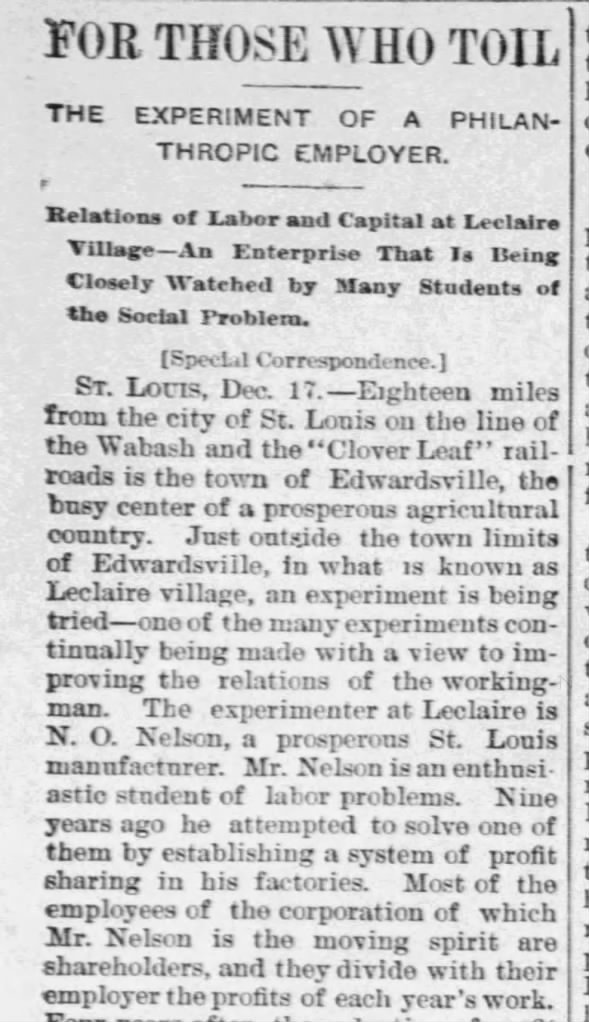 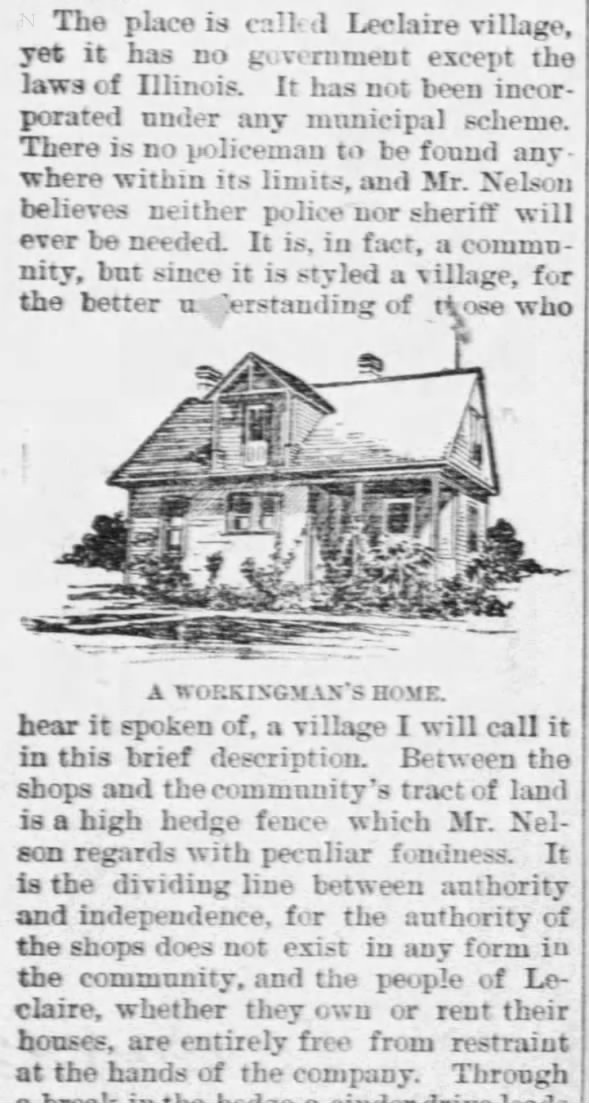 In the end, Nelson’s idealism got the best of him and he begins to sound like a model for Kurt Vonnegut Jr’s Elliot Rosewater.

Nelson’s interest in cooperation went beyond the founding of Leclaire. After 1911, when he was 66 years old, he launched a food cooperative in New Orleans after visiting the slums of that city and seeing the desperate need of the people living there. Soon he was spending most of his time in New Orleans developing the Nelson Cooperative Association and investing heavily in 63 retail grocery stores, a creamery, a bakery, a condiment factory, and a 1,580 acre plantation all of which provided a savings of 10 to 20% to 14,000 families.

Though initially successful, this enterprise experienced such great losses during World War I that, following its failure in 1918, Nelson filed for bankruptcy, pledging his stock in the company to pay for his debts. Nelson had financed the Cooperative Association by writing checks on the N.O. Nelson Company in St. Louis. These checks were charged against his stock in the company, but the leadership of the Company, notably Nelson’s son-in-law, Louis D. Lawnin, did not support Nelson’s efforts. Lawnin believed the company should stick to the plumbing supply business. Nelson was forced to resign from the company.

Leclaire thrived at first under the guiding hand of Nelson, though it never realized the full scope of his expectations. There were certainly families which found in Leclaire the better life of which they had dreamed. Others rejected Nelson’s values and scorned the life of simple dignity and rationality he offered. It was these who were the source of Nelson’s ultimate disappointment and these, perhaps, who prompted the judgment of Nelson’s friend, Upton Sinclair.

Leclaire was a dream ahead of its time.

Photo at top: Kitty, Tom, and Nellie Flanagan, taken in Edwardsville during their time in Leclaire, 1897.